This section allows you to view all posts made by this member. Note that you can only see posts made in areas you currently have access to.

December 13, 2020, 02:49:50 pm
Greetings! With 2021 being a new year, I think it's time we work on some events for the department. Since that's only in a few short weeks, this thread is going to be dedicated to just laying some groundwork for what's planned, and figuring out the finer details like times from there. For January 2021, I think running things on the weekends would be a good idea, and I have plans for three of the five slots:


The last two can either be used as runoffs for the first three games, or used for something else. Time will tell.

So now, we're onto times: Obviously a lot of us are quite busy, so finding a time that works for us all is going to be a challenge. If you are interested in these events, please reply with what times work for you and I will post a poll in the coming days to work things out more.
2

If you are interested in joining in, please let me know either here or on Discord. If the time is not ideal, that can also be changed!

November 17, 2019, 02:13:25 pm
The server currently has a whitelist enabled. If you want to be added to the server whitelist, please leave your Minecraft username here.
4

Announcements / Re: Design A Theme Competition 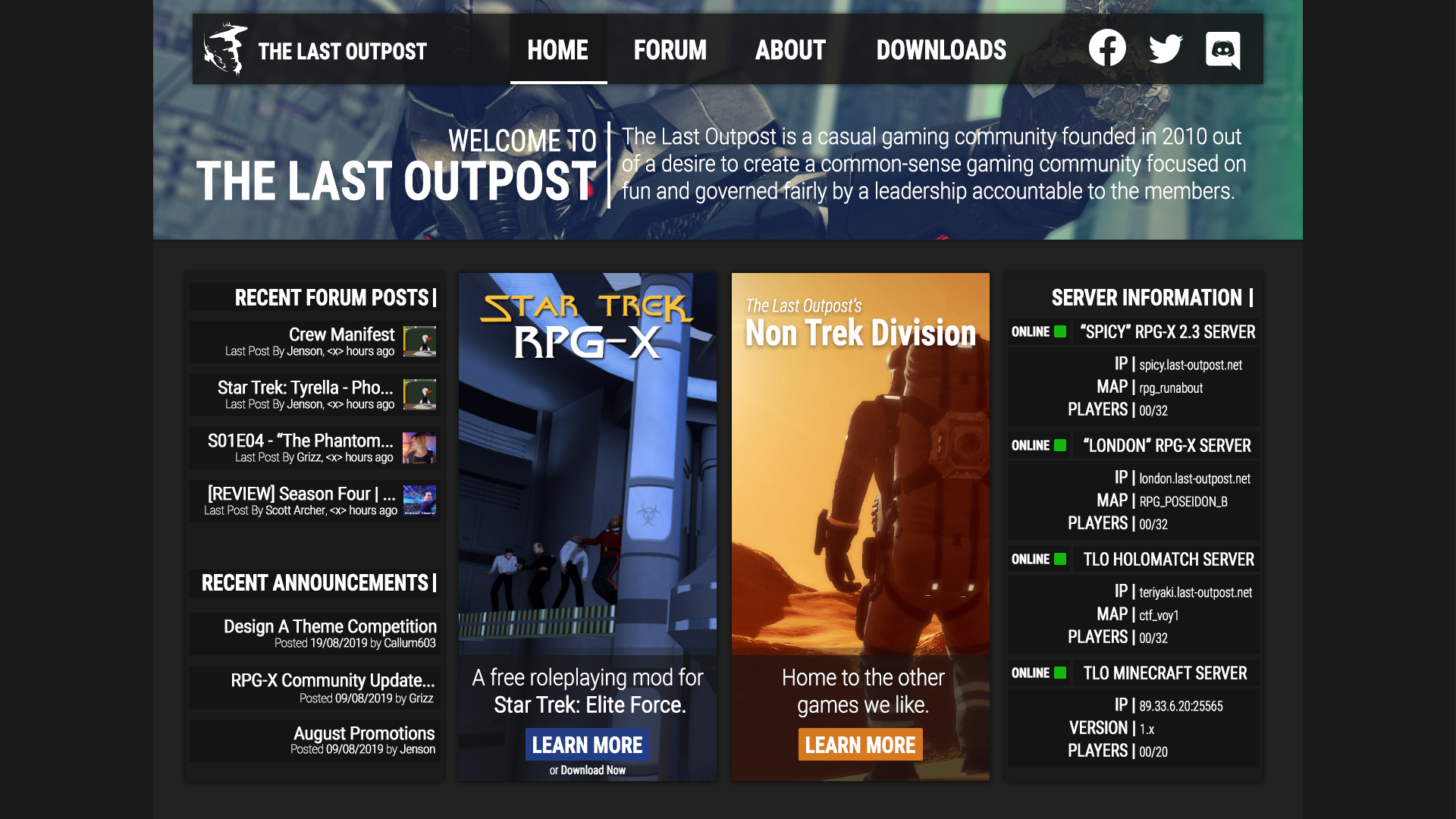 Intention is to make it look modern and clean with everything being both clear what it does and within easy access. Basically, everything you're visiting TLO for should be right there and for most people that's gonna be our divisions or to join our servers.

And of course, everything is subject to change. I feel some elements might end up too big in a live situation and I know there's some things missing like the VSlider (though I have ideas).
5

July 01, 2019, 08:29:06 pm
Some serious thoughts for a moment: I feel like this might have some legal problems after Stage-9 was cease and desisted by CBS which was rather similar to RPGX in scope.

Maybe it would be better to make some sort of "universal roleplaying sandbox" thing that isn't *built* as a Star Trek themed entity but has a lot of mod support to make that possible.

Minecraft / Future of the Server

That being said, another concern is that the version of the game it's running can't use Bukkit, which has its drawbacks if we ever want the server to be open for everyone (Bukkit allows more advanced protection to prevent griefing, among other things).

So with that being said, I'm putting up a poll to decide this -- it closes after 24 hours of posting so we can get any changes up hastily.

(The Bukkit server would be running the bare essentials to start with, with more plugins added based on interest).
7

The Embassy / Re: Daedalus

From the 25th of September to the 1st of October, the division will be playing various games, while we have no formal timeslot for these activities, they will all be coordinated from the TLO Discord Server (which you can join here). The current lineup of games is, but not limited to:

If you have any suggestions for games over the week, be sure to mention them!

But that's not all! From the 22nd of September to the 25th of September, Dendo Hellen will be hosting various Overwatch related activities to go alongside its free weekend!
9

August 22, 2017, 11:03:12 am
Much like RPG-X, STO has an emote system (which I find much more intuitive than RPG-X, to be honest). There's also various player-instanced areas (such as fleet holdings, bridges, foundry missions...), so fairly easily.
12

I'll begin making preparations with Callum to get this set up, as well as getting the current world up for download.
15